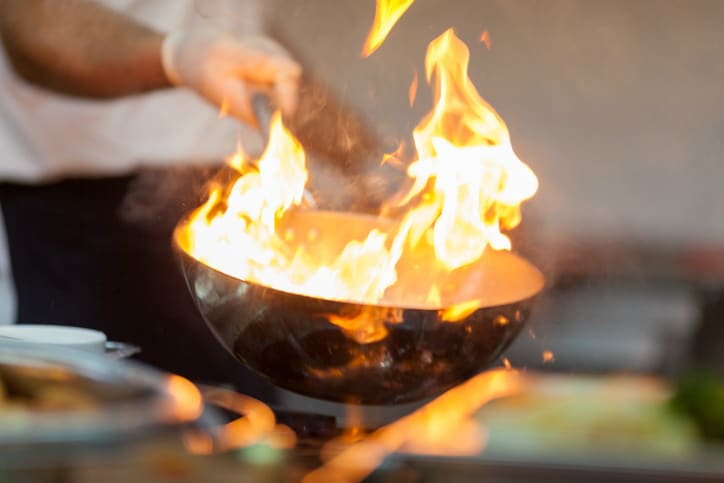 Restaurants and other commercial cooking facilities are widespread, and, while their services are highly beneficial to their patrons, they do expose individuals and property to certain hazards. One of the most troubling dangers from commercial cooking operations is that of cooking fires. Each year, an estimated 5,600 restaurant fires are reported to fire departments in the United States, resulting in injuries, deaths, and property damage.

Some cooking fires are milder than others. For example, in February 2017, a cooking fire at a Greenwich, Connecticut restaurant needed to be put out by fire department crews, as the flames spread into the chimney and hood duct system after the hood extinguishing system did not activate. In this instance, the damage was minimal and everyone present left the scene unharmed.

However, due to the ease and simplicity through which fire can spread, some restaurant fires can be tragic. This was felt in New Delhi, India, also in February 2017, when two firefighters were killed and two others were injured after a cooking gas cylinder exploded as they were extinguishing a restaurant blaze.

These types of incidents can generally be prevented with the proper installation and use of cooking equipment, hoods, ducts, fans, fire-extinguishing equipment, and special effluent or energy control equipment, in accordance with NFPA 96-2017 – NFPA 96 Standard for Ventilation Control and Fire Protection of Commercial Cooking Operations, 2017 edition. Also, as specified in this standard, establishing the appropriate clearances, exhaust, and grease removal devices in this equipment can assure fire protection for commercial cooking activities.

Unfortunately, interaction with an open flame will always present some level of potential harm. However, through the sufficient design, installation, operation, inspection, and maintenance of cooking equipment and operations, in adherence to NFPA 96-2017 ventilation control and fire protection guidelines, users are assured safety and reliability with anticipated use.

NFPA 96-2017 is the latest edition of the ventilation control and fire protection of commercial cooking operations standard, and as such contains many changes from the previous version of the standard. To assist users of the document, NFPA 96-2017, like other NFPA standards, marks all technical alterations are marked with gray shading. For example:

Furthermore, new sections, figures, and tables are indicated by a bold, italic N in a gray box to the left of the new material, such as:

However, this should not foster the belief that residential kitchen fires are not an issue. In fact, U.S. fire departments respond to an average of 166,100 home structure fires annually that involve cooking equipment. Cooking fires are the number one cause of home fires and home injuries. These contribute to deaths in the hundreds, injuries in the thousands, and over $1 billion in direct property damage every year.

The majority of these domestic catastrophes are caused by unattended cooking, and, on holidays, cooking fires are known to thrive. For example, Thanksgiving 2013 saw 1,550 cooking fires, an amount 230 percent higher than the daily average. NFPA advises home cooks to remain alert, stay in the kitchen while you are frying, grilling, boiling, or broiling food, and make special considerations while cooking with oil.

NFPA 96-2017 – NFPA 96 Standard for Ventilation Control and Fire Protection of Commercial Cooking Operations, 2017 edition is available on the ANSI Webstore.

Commentary to the International Fire Code