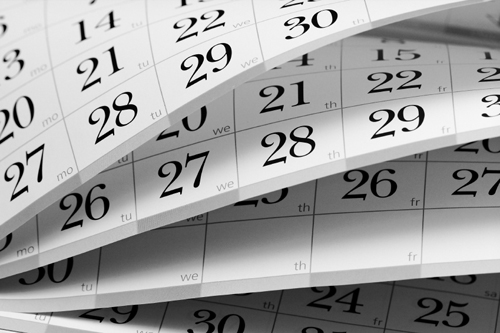 The Gregorian calendar has become the standard for measuring the progression of time since Pope Gregory XIII first introduced it in the year 1582. His papal influence let it spread to Italy, Spain, France, and other Catholic countries before becoming the most widely used calendar standard. Now years later, it is an official standard and civil calendar, acting as the basis for date and time guidelines in ISO 8601:2004 – Data elements and interchange formats – Information interchange – Representation of dates and times. The standard structures and names for months and other labels used in the Gregorian calendar are reflective of the past calendars from which it derived, and it even has similarities with the calendars that it shares no direct connection.

Humanity has long been interested in measuring and understanding the dimension of time, and has used the different celestial, or “heavenly”, bodies to track the changes in the rotation of the Earth and alteration of seasons. However, assessing the calendar systems of the past is not always reliable, since records were either poorly taken or have been long lost over time. Archaeological evidence in the past several years has indicated that Stone Age Britons from 10,000 years ago might have used a complex of pits to indicate the months of the year and the lunar stages in those months. Additionally, while the purpose of Stonehenge is not exactly known, some believe that the massive rocks might indicate some kind of calendar or representation of the movement in the solar system.

The Sumerian calendaris the earliest known confirmed calendar. The Sumerians were interested in astronomy, and their months began during the visibility of the first moon. This gave them twelve lunar months. The Mesopotamian solar year was divided into two seasons, which were essentially an extended summer and regular winter. Basing the 12 months off the visibility of the moon turned out to be problematic, since a lunar year is only 354 days. To accommodate this into the 365-day solar year, which they depended on for their agriculture, the Sumerians installed what is basically a leap month every several years, which was to be determined by the king at the time.

Much of the success of the Sumerian calendar is due to the economic benefits that came with being able to track barley loans, which later led to the implementation of silver as a standard form of currency. The successive Babylonians adapted the Sumerian calendar into their use, and strove to solve the issue of adding random months during the Eighth Century BCE. During this time, astronomers realized that 235 lunar months are almost identical to 19 solar years. This led them to conclude that 7 out of every 19 years ought to be leap years with an additional month. This solidified the standardized Babylonian calendarin Mesopotamia.

During this time, in a completely different part of the world, the Maya had developed their calendar system as the standard in a significant portion of Mesoamerica, specifically, the Guatemalan highlands, Veracruz, Oaxaca and Chiapas, Mexico. The Mayan calendarconsists of different cycles, or counts of different lengths, including the Tzolkin 260-day count and the Haab 365-day cycle, the latter of which consisted of 20-day weeks plus additional 5-day period. These calendars were combined into a calendar that was used to track a period of time that spanned generations, the Long Count, which begins in the Gregorian calendar on August 11, 3114 BCE and initially ended on December 21, 2012. Centuries after the fall of the Maya Civilization, misinterpretation of the Long Count calendar and the assumption that it would be ending, and not just simply recycling, sparked the belief that it would mark the apocalypse.

In the last millennium of BCE, the Roman calendarbecame the Old World standard, but it did not last long due to its bizarre structure. It consisted of 10 months that were either 30 or 31 days long, beginning in March (Martius) and ending in December. Initially, the winter season was not accounted for in the 304-day year, but the eventual addition of January and February extended the total year to closely match the actual solar year.

Despite this change, the Roman calendar was incredibly complicated and frequently required the decision to remove or add days to keep the calendar in track with the seasons, leading to Emperor Julius Caesar’s motive for an update in 45 BCE. Working with the Alexandrian astronomer Sosigenes, he created the Julian calendar. Key changes to this calendar included a 365-day year and the addition of a Leap Year once every 4 years. The Leap Day was initially February 24, since February marked the end of the year in the Roman calendar. However, the months were later adjusted into the order that they are today, giving some of them names that do not match their chronological placement. For example, October moved from the eight to the tenth month of the year. The name of the seventh month was also changed to July, in honor of Caesar.

Following this time, the Julian calendar became the standard as it spread in usage all across the vast Roman Empire, but there really was not a standard form of epochs. Different people devised the majority of these as a way to determine the time in which the Earth was created according to their respective cosmologies. One notable system was the Diocletian system, named after the 51st emperor of Rome, which began during his reign. In 525 CE, once Christianity had become the predominant religion of Rome, a Monk named Dionysius Exiguus decided to do away with the Anno Diocletiani era and its memory of an emperor who had been mercilessly ruthless to Christians.

Dionysius was determined to make his era coordinate with the birth of Jesus Christ, making the starting date of  Anno Domini (AD) 1. This was incredibly important to him, since he wanted to be able to accurately date Easter. Even though he was a skilled mathematician, today we do not exactly know how Dionysius determined the date of Christ’s birth. Today, historians actually place the birth of Jesus Christ around the year 4 BCE, so his calculation ended up being slightly off, possibly from placing the first day of the year in September rather than January. He also established the time before AD 1 to be BC, or “Before Christ”. Interestingly, there is no year 0 in the modern era system, not for any particular deliberate reason on Dionysus’s part, but because Romans had no symbol for the number 0, which had not yet been passed on by Indian mathematicians. Due to his change, Anno Domini 532 followed Anno Diocletiani 247.

Anno Domini became accepted all throughout Europe in the next several centuries, but there was still one major issue with the standard Julian calendar: it miscalculated the length of the solar year by 11 minutes, causing it to fall out of the seasons as time progressed. This is what encouraged Pope Gregory XIII to alter the error in the calendar in an attempt to place the date of Easter closer to the spring equinox. He and Italian scientist Aloysus Lilius realized the addition of a Leap Day every four years made the calendar slightly too long, devising the idea of leap years divisible by 4, unless that year is divisible by 100. However, if the year is also divisible by 400, a leap year is added regardless. This concept gave us the Gregorian calendar that we use today.

Change from the Julian to Gregorian calendar did not happen instantly. In 1752, a vote of Parliament in Great Britain determined that England and all of its territories would switch to the adjusted calendar standard, advancing the calendar overnight from September 2 to September 14. It is rumored that British citizens woke up in outrage to this change, while Benjamin Franklin was quoted as saying “It is pleasant for an old man to be able to go to bed on September 2, and not have to get up until September 14.” Some countries didn’t make this switch until the 20th Century, including Russia, Turkey, Greece, Albania, Lithuania, and Estonia.

The most recent change is one that has likely gone unnoticed by many people. In the year 1615, after over 1000 years of utilizing the AD label in the Gregorian calendar, Johannes Kepler, German mathematician and astronomer who discovered the elliptical orbit of the planets, referred to Anno Domini as the “Vulgar Era”. Over the next several centuries, as the majority of society moved closer to an ideology more closely associated with Modernity, with a greater emphasis on secularization and scientific thought, the term Vulgar Era was given more traction, and was often interchangeable with Common Era. Since the mid-Twentieth Century until today, the designation of CE (Common Era) and BCE (Before Common Era) has been used to respectively replace AD and BC in the academic community.

US Customary System: An Origin Story