Standards comprise the connective tissue that binds society into a cohesive and productive whole; wherever you look, you’re likely to see a standard’s influence. Appropriately, ASTM International’s slogan is “Helping our world work better”, a statement supported by the ANSI-accredited standards developing organization’s over 13,000 standards serving all facets of industry. Without the existence of the guidelines present in these documents, the world could lack the comfort and dependability that comes from assured safety, reliability, and the ability for enhancement.

This idea is lucid throughout the just-released above video. The individual we follow interacts with an industrial plant, a laboratory, and similar settings where ASTM standards and tools would be used. The video gives a visual nod to ASTM’s largest footprint – the petroleum industry – but also references “dozens of industries” due to the diversity of ASTM’s portfolio.

However, the world is more than business and industry; it effectively is shaped by our personal lives and homes. As such, the narrative strikes a powerful note when the video ends with the character we have been following returning home as her daughter rides a bicycle with the security of a helmet. This could serve as a motif for many things, but, taken quite literally, it shows the reach of ASTM’s influence; bicycles are subject to an assortment of specifications and standard testing procedures, and the most used standard for bicycle helmets is ASTM F1447-18.

Of course, the extent of this plotting is very deliberate, and it is the culmination of the efforts carried out by the people at ASTM International who were tasked with creating this video. Their goal was to convey effectively the benefits of a wide variety of stakeholders who are directly engaged with ASTM for standards and related services. Prior to filming, the group honed onto some of their organizations key concepts and messages, and then began to “connect the dots” among them and the industries and people they serve. 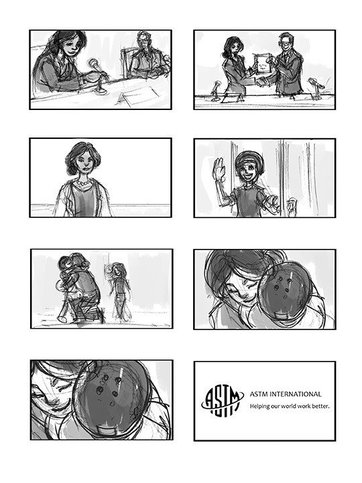 The result is the clear path that we follow in this narrative. The moment this video ends with the focal character making use of standardized safety products at home, it has come full circle, as it begins with her handing her daughter a backpack, a more subtle nod to standardization (ASTM standards address textiles, as well as measuring backpack capacity).

Many of these ideas are present in the final product, but they also impacted the manner in which this video was shot. In a highly technical approach, the content we see is focused specifically on the character’s journey, allowing for the connectivity between the personal, professional, and communal in delivering its message.

The locations in which these scenes were filmed are representative of this idea as well. In close proximity to ASTM International’s global headquarters in West Conshohocken, PA, all the footage present in the video was captured in nearby Philadelphia, other locations in Pennsylvania, and southern New Jersey. ASTM International exists on a massive, overarching scale, as many of its standard practices and testing guidelines are in use by organizations and companies worldwide. However, just as with anyone or anything else, the organization has a home, and the choice to film locally emphasizes the personal significance of standards.

The ending bicycle scene, if not taken literally, can very well serve as a symbol for the importance of any standard. A somewhat startling fact to hear is that the bicycle helmet wasn’t invented until 1975, wedging a 100-year gap between the invention of the bicycle and the device responsible for preventing severe head injury after falling off one. Even adding to this unfortunate truth is the fact that bicycle helmets are not inherently safe, but must be designed and manufactured to be safe. This is where standards come in, as ASTM F1447-18 helps to assure safety of bicycle and other recreational helmets.

Ultimately, there is little difference between this example and standards used at industrial plants and laboratories: standards help make the world more efficient, more innovative, and foster better quality of life overall.