Touch screens have become a widely used input method for computers, cell phones, tablets, and video game controllers. While this type of gesture-based interface can be an easy and straightforward way of interacting with computers, the arm and hand movement needed for inputting with touch screens might not be ergonomically sound, and can possibly lead to health problems with those who use them.

In addition, ISO 9241-400:2007 – Ergonomics of human-system interaction – Part 400: Principles and requirements for physical input devices gives guidelines for the use and implementation of those input devices. These specifications for hardware identify ergonomic needs for touch screens and related equipment, such as styluses and light pens. 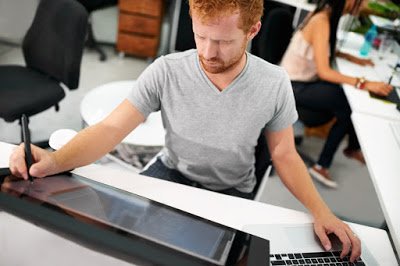 The major concerns addressed with the ergonomics of computer workstations are straining from continuous hand movement, pain from improper sitting positions, or eye damage due to user distance from workstation. Straining of the fingers, arms, and legs are particularly alarming for touch screens, since these screens often require the interaction of the arm and shoulder during input, something that is rare with the use of keyboards and computer mice.

Luckily, many issues for the ergonomics of touch screens are not necessarily applicable to many devices with touch screens. For example, phones and tablets are generally used by hand, giving them a controllable axis of operations. By being able to freely move tablets and smart phones during interfacing, users do not apply significant strain to their arms and shoulders. Additionally, these devices are intended to be used for a much shorter period of time than a workstation computer.

Despite this, users can very easily use these devices for a long time, and most touch screens can ultimately be responsible for carpal tunnel and repetitive stress syndrome. However, these problems are much more likely to occur from the use of a touch screen laptop or desktop, in which the user’s finger takes the place of a mouse in moving the cursor. This is because the screen rests parallel to the body of the user, and he or she is forced to perform interface gestures during flexion and extension of the arm, hand, and fingers.

The shoulder pain that derives from continuous extension of the arm bones to interact with a touch screen has been nicknamed “gorilla arm” and was responsible for killing the first wave of touch computing in the 1980s. Additional problems with horizontal touchscreens include the difficulties of thick fingers interacting with scroll bars and menus that are designed for much smaller arrow cursors and the grease and moisture on the user’s fingers.

Touch screens are often very user-friendly interfaces, since users can feel as if they are directly interacting with their computer’s software. However, it is not ideal for a computer workstation to consist primarily of a horizontal touch screen, whether it is from a desktop, laptop, or horizontally fixed tablet. Instead, in accordance with ISO 9241-420:2011, a computer workstation should consist of a variety of input devices, and if there is a touch screen, it should only be used infrequently. In addition, manufacturers should follow ISO 9241-400:2007 so that their products conform to ergonomic recommendations.

NFPA 70E: What the 2018 Standard for Electrical Safety in the Workplace Provides